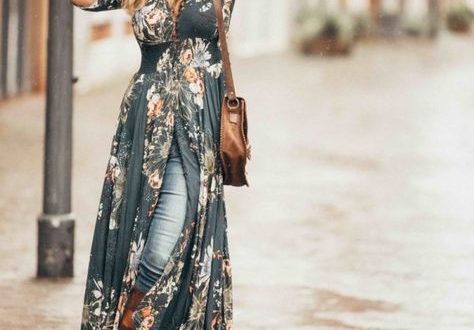 The Boho-chic style has been around for a taste of time, although its serious influence on the fashion fraternity was only witnessed during the mid-2000s. Its documented history suggests that it developed in the early 1960s but became especially popular in the early 2000s, especially after 2004. Since then, the Boho chic or boho style has been in constant bloom and now has a major influence on many young people from all over the world. Despite their waning influence at the end of 2005, they re-emerged as dominant figures in the fashion industry a year or two later. There are many reasons for their current popularity.

One of the most notable reasons for the boho style's popularity is the fact that it has many nice combinations. There are a number of elements in the style that make it worth going for. Perfect examples of boho-chic outfits that illustrate the elegant boho trend are the kimono jackets and the shibori design. They all have a couple of style elements that are hard to find in the current fashion market.

When it comes to elegance; The boho-chic style is really one of the best styles available today. There are many recent trends that you can look for if you want to take the level of your elegant look to a whole new height.

There are all weather clothes that you can watch out for. You can buy boho-chic clothes that are designed for winter, summer or even autumn if you love to be specific.